Cub history tells us not to trust touted outfield prospects, but was Tyler Colvin ever really that touted. If the young man from Georgia wasn’t, he is defiantly thought high of now. His .440 batting average and .620 slugging percentage from 50 at bats this spring is a strong indicator that he can produce in majors. Tyler has been one of the most productive cubs this spring, meaning we need him in the lineup. But with none of the three outfield spots vacant, he might not be a fixture in our line up yet. There are two questions I will pose in relation to this dilemma:

Would Hendry have signed Marlon Byrd if he would have know what Colvin would do this spring? I believe he would and should have signed Bryd. Marlon’s clubhouse presence is much need after a year of Milton Bradley. Most importantly, he is a solid defender with a experience and a track recored.
If Fukudome doesn’t hit well to begin the year, should Colvin take over in right? I think so. I am a Fukudome fan and believe his high walk right will be valuable at the number 2 spot in the lineup. However, Fukudome is a .258 hitter over two years and Colvin’s five tools shouldn’t wait on the bench. I understand Kosuke would make a lot of money just to sit on the bench, but good Lou likes the players thats producing to be starting. We’ll see what happens…

Milton Bradley is a huge…… wait, don’t want to say anything that could be in the least bit negative.

I might be considered a racist. I know there are racist fans out there and that’s sad, but come on
Milton. Hooray for Jim Hendry! His response was great and he can admit that signing Milton was
a mistake.
On another note, the spring games have been eventful to say the least. I understand that a majority
of folks are looking at Zambrano to turn it around and be the difference maker in the rotation. I don’t
doubt Big Z will be excellent this year, but my money is on Randy Wells to the be key. He has looked
extremely sharp in his first two starts.
Heavy weighed down with Hall of Fame opinions of my own, the new year brought a surpassingly joyful HOF election for most die hard Cubbie fans. Despite a jaw dropping Alomar snub and another year of Blyleven getting kicked to the curb, one of my all time favorite’s is set to be enshrined in Cooperstown. The Hawk is in the Hall and I am not referring to the terrible White Sox announcer. Andre Dawson will now reside with fellow teammate Rayn Sandberg, and I am absolutely thrilled. 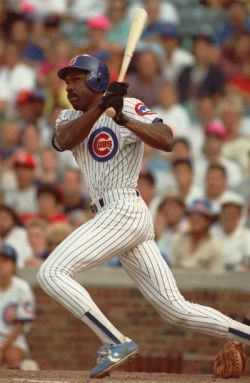 Due to my obvious bias, I don’t feel the need to argue his place in the Hall. I will tell you this; I remember sitting in my dad’s lap in the late eighties watching our lovable losers play and Andre Dawson seemed larger than life. In spite of his deteriorating legs, the Hawk seemed like an athletic specimen to a young kid like myself.  With an intense presence at the plate and hard nose defense that won eight gold gloves, he won me over as a fan. Even though some of his best years were with the expos and he only spent six in Chicago, I will always imagine the Hawk in Cubbie blue. He might even be wearing an expo cap on that immortal plaque, but he’ll be an all time Chicago Cub to me.
Now once Santo receives his due place in the Hall, all Cubbie nation will have no qualms in the Baseball Hall of Fame.
With all the rumors pointing to Hendry participating in trades, instead of many signings, he leads into the winter meeting with a minor deal. From what I have read, most cub fans agree this trade  was designed from the necessity to unload rather than the desire of prospects. Not that Jeff Gray, Ronny Morla, Matt Spencer is an awful take, but it is nothing to be salivating over. The addition of Gray is much needed to our bullpen depth.
Unloading Jake Fox and Aaron Miles to add a little more room on our roster and payroll will only help. There was no room for Jake Fox in front of the ivey and he will fit in well as a DH in Oakland. The team seems to be preparing to bring up top prospect Stan Castro in at short, by hinting that Theriot might move to second. This leaves absolutely no reason to keep Miles and his $2.7 million. I believe if this scenario plays out, then Fontenot will go back to the bench where he thrived in 2008 and will be the best option to fill in at third. I’m excited at the potential of Castro, however,  the idea of a Cubs top prospect is frightening. Do names like Corey Paterson, Mark Prior, and Felix Pie ring a bell?
I have read a large amount of negative and positive responses to this trade in the blogosphere. I’m not sure I have a real opinion until we see how the rest of Hendry’s winter plans play out. The trade with Oakland could even be a pre-cursor to a larger trade. I beg Hendry to focus on one thing at the winter meetings, removing Milton Bradley from the Chicago Cubs forty man roster.

Houston truly has a beautiful ballpark and I thoroughly enjoyed my visit to their city. However, the most beautiful part of the entire trip had to be the one key piece missing from the Cubs past few seasons. Carlos Zambrano won his first opening day start! A truly wonderful beginning to our 2009 season and I was thrilled to be cheering from the first baseline.

Here are few things I noticed from the first three games of the season:
– Zambrano came ready to deal.
– Our two LSU boys can hit. I predict a huge season from both Theriot and Fontenot. Every Tv broadcaster I have heard this offseason has torn Hendry a new one for replacing DeRosa with Aaron Miles. Were cubs fans and Piniella the only ones who knew that Fontenot was the man for the job? What a start for these two middle infielders and what an intriguing story of how these two winners continue to play side by side.
– One game can change the the feelings towards Fukudome (at least for now). Wednesday he went 4 for 5 with a homer and a stolen base. I think this is a good sign that we will get the same Fukudome that began the season last year. I don’t think the question should be, “can he be a good hitter?” We should be asking, can he hit continue to produce after the all-star brake?
– Milton Bradley can defend! Sitting down the first baseline, I was privileged to see Milton’s defense up close. The first play he made on Monday, he hustled to a drive down the line and made an amazing catch. The second play was towards center field an the ball ended coming out of his glove. I couldn’t even figure out how he got to that ball and fell to his knees almost making an impossible play. The point is, he can hustle and isn’t too shabby in the field.
– Lee put on a batting practice show. I have know idea why his power numbers have dropped, because all but three hits that I saw, went into the left field seats.
– I am very curious to see how Piniella uses the bullpen. Gregg seemed shaky even when he earned the save and why did Guzman close on Wednesday? There is no doubt they are young and talented, but I am curious to see how they will be used.
– There are some Houston fans who need to learn how to stay seated and watch. It’s hard to watch a game when everyone in front of you get up eight  times an inning. In the eighth inning half the crowd left like clockwork, no matter how close the game use. Sit down and enjoy a game!

Overall, I really enjoyed my first opening day experience! Watch the Astros walk off on Tuesday was not ideal but it is always exciting watching such a close game. I’m ready for some more cubs baseball.

One can only be absolutely terrified to view an upcoming Chicago Cubs season with the least bit of optimism. If we have learned anything from 2008, no matter how special a team is, we fans can still have our hearts ripped from our chests come october. That being said, it’s hard not to look forward to the Cubs 2009 season with excitement and hope. The fact is, we have a good team. They played excellent baseball last year and with some good changes we should expect nothing less this year. Our lineup will be dominating and well balanced. Who wouldn’t like the bat and focus on winning that Milton Bradley brings? I will miss Mark DeRosa just as much as the next Cub fan, but I am thrilled to see what Fontenot can do through out an entire season. I believe The Riot and Geovany are gone to keep improving from what they did last season. The only real question mark in the whole line up is Fukudome. But, with Reed Johnson fully capable of starting in center, who is worried? Our rotation is solid and there are nice young arms waiting in the wings if there are injuries. I’m already excited. Our bullpen is much different, younger and deeper is a good kind of different. I was rooting for Marmol to win the closing job. However, I can’t blame Piniella for choosing Kevin Gregg. They both have pitched exceptionally  well this spring.  Some of the hardest decisions in baseball are when everyone  has earned a job or spot, but this puts the Cubs in a very good position. Altogether, our team we love to be depressed for looks promising, I’m sure this will be an enjoyable season to watch. Who knows, maybe it will be the year we go all the way!